It was an overnight train ride from Tully to Brisbane on the Queensland Railway. Our first-class accommodations were wonderful, and while we traveled the same distance as it is between Boston, MA and Wilmington, NC, we never left the state of Queensland. In a country with only six states and two major territories, it's understandably a long distance, but many travelers are taken by surprise. The distances can be deceiving.

For the next three nights, Jeff and I settled into the Explorers Inn. Below is a photo of our home away from home. Unbeknownst to us, we were decompressing from being on the move the past eight weeks. Brisbane had much to offer, and we discussed taking a bus ride through the city, but there was little motivation to do any more than take short walks, eat in, and watch movies. The traveler in us was exhausted. 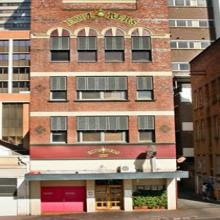