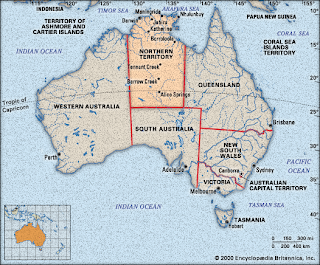 When we drove north from Coober Pedy to Uluru (Ayers Rock) we left the state of South Australia and entered the Northern Territory. Territories are like states in that they have capital cities, but they are governed differently. The USA had a similar situation when Alaska was a territory before it became a state.

This was our second day in Uluru-Kata Tjuta National Park (SW of Alice Springs on the map above). At the end of Day 32, we found affordable accommodations at Curtin Springs Cattle Station ninety minutes down the road and stayed two nights. To see what Curtin Springs looks like, click on this link. It's worth a look and the extra drive to experience a working cattle ranch complete with an authentic outback steakhouse. Below is a picture of one of the animals on the property. I'm not sure what it is, a baby kangaroo or maybe a wallaby. I forgot to ask. It was cute and seemed to enjoy my company. I go into much greater detail about our day in the park, the Aborigines, and Curtin Springs here. 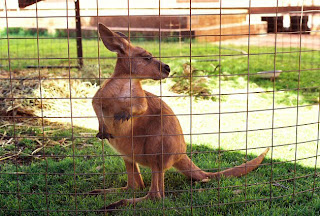 On this day, January 9, 2000, to be exact, I took the picture of a lifetime, the cover photo of the book. Jeff and I were driving away from Kata Tjuta on our way out of the park when I looked back and saw a surreal landscape. I shouted, "Stop the car!" Jeff pulled over, I jumped out, framed the shot, and jumped back in the car. Little did I know that brief moment in time would play a major role in the telling of this story. Because the picture (below) was taken on sacred ground, I now have a permit on file, issued by park officials with permission granted by the Aborigines, allowing me to use the photo in this way. 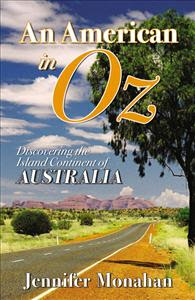 Day 34 will take us to Kings Canyon National Park, another popular attraction in the Red Center.
http://www.jennifermonahan.com/
Posted by Jennifer Monahan Explorer, writer, and philosopher seeking life's truths at 12:00 PM