Above is a detailed map of the island.

Australia has an interesting, but brutal beginning known as a "convict past," a continent built on convict labor. Hundreds of years ago, Great Britain sent the baddest of the bad to this remote location on the other side of the world from which there was no escape, and Rottnest Island has preserved a part of this past.

Much like the island of Alcatraz off the coast of northern California, Rottnest is within sight of the mainland. It can see Perth, and Alcatraz can see San Francisco, but escape was nearly impossible from each due to strong currents, cold waters, and a long way to swim.

"The Quod," a set of prison houses on Rottnest that remain to this day, is a reminder of the unfair and brutal treatment of men, Aborigines included. Many of the crimes on record were misdemeanors and didn't warrant the punishment that followed prosecution. Conditions were horrific, and it wasn't until 1902 that the jail was officially closed. A book titled The Fatal Shore by Robert Hughes is one of the best known writings about Australia's dark history.

The Rottnest Island we know today reflects a peaceful and friendly atmosphere. Jeff and I chose the busiest times of the year, summer, to visit, and we were lucky to find a room at the Rottnest Lodge. Staying two nights gave us one full day to explore. To be able to snorkel the reefs even in summer, I needed a wet suit, because the waters from Antarctica were cold. It was like swimming off the coast of Maine. brrrrr... Hard to believe reefs survive this close to the South Pole.

In addition to the coral reefs, there are shipwrecks that grace the shores. The island is loaded with natural beauty and history, some sad and some inspiring. The photos below reflect a variety of fish that can be seen swimming in these waters. 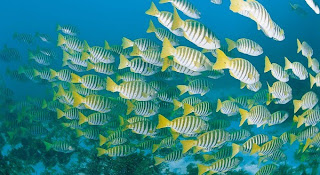 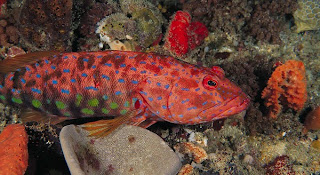 Posted by Jennifer Monahan Explorer, writer, and philosopher seeking life's truths at 9:00 AM