Jeff and I stayed one night at the Mount Isa Outback Motor Inn and then headed east. But before leaving Mount Isa, we toured the Riversleigh Fossils Interpretive Center. This is where we learned about dinosours found only in Australia. There were full replicas of marsupial lions and rhinos on display among many other odd creatures. Can you imagine that? A lion and a rhino carrying their young in a pouch like a kangaroo. Cool.

Several hours down the road we arrived at Kronosaurus Korner in Richmond, Queensland. The doors to the museum had just closed, so we had to settle for a photo op with another "Big Thing of Australia" representing Kronosaurus queenslandicus, a giant ocean dwelling dinosaur. Much of Australia was under water millions of years ago, and to this day, skeletons continue to pop up after a good rain. Below is a photo of me wrestling with Mr. Queenslandicus. 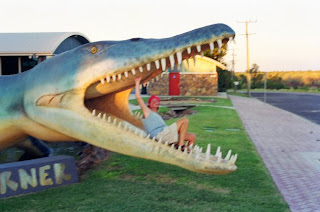 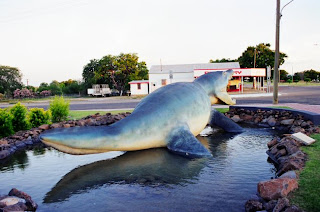 There was still time to drive another two hours before dark and before kangaroos started migrating in the night. We ended up in Hughenden, Queensland. One more day of driving, and we'll be on the east coast!