Coober Pedy translates to "White fellow's hole in the ground." It's considered the opal capital of the world and is most famous for the film set of Mad Max Beyond Thunderdome with Mel Gibson and Tina Turner. It's also the set of another Aussie classic, The Adventures of Priscilla, Queen of the Desert. Coober Pedy has plenty of sand, explosives for blasting the land, and lots of cold beer 'cause it's hotter than hell. The picture below gives us a sense of Aussie humor. 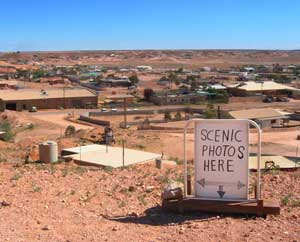 Warning! Watch your step! At any given moment, the earth may expose an abandoned mine shaft and swallow you up. 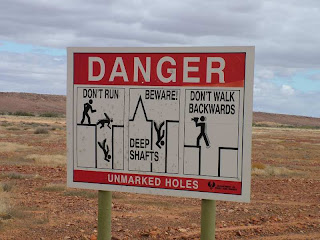 Oddly enough, the only picture I took in Coober Pedy was of our hotel room at Bubby's Look Out Cave Motel (below). Most of the town lives, works, prays, and plays underground where it's a cool 72 degrees year round. 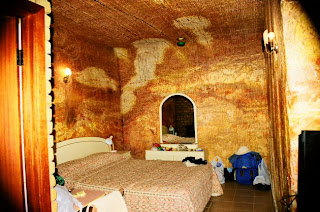