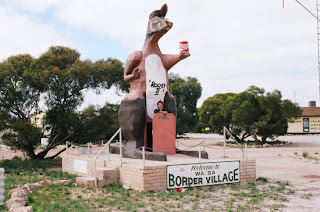 Here, I am a few miles down the road from Eucla, at the Western Australia/South Australia border. This "Big Thing" called "Rooey II" is one of the most famous of the tall structures scattered throughout the country. Jeff and I stopped long enough to take photos before moving on to the Great Australian Bight. Below is a picture of me on the Bight's windy coastline. The land looks as if it broke away from Antarctica only yesterday, but it's been eons since this happened. The entire continent is still moving north, "a movement comparable to the growth of a fingernail," says David Johnson from James Cook University in northern Queensland. No worries, that's only 67 mm a year. Johnson went on to say that one day, the land is either going to run into Asia, or it's going to gradually subside and disappear beneath the sea. If you'd like to hear the whole story and learn about Johnson's book, The Geology of Australia, click here. 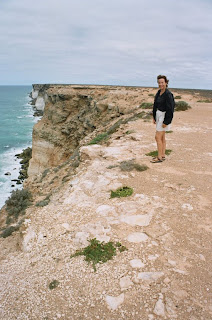 This was the day of the "Closed Petrol Station Drama." Below is a picture of Max the Cat, the one I made friends with while waiting for a solution to our problem. He's the black and white blob on top of one of the bags inside the car. That's my shadow to the left. In the background is one of the petrol pumps closed up tight. The sun was setting, we wanted to move on, but we were out of gas and the station owners of BOTH stations had gone fishing together...for a week. To find out how we got out of this predicament, check out the rest of the story here. 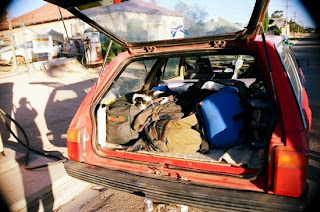