Below is a picture of The Ningaloo Reef Resort in Coral Bay, Western Australia. 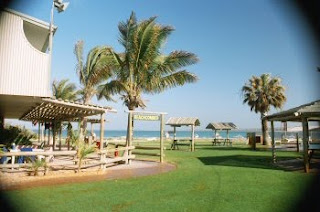 Christmas was only two days away, and this was our 2nd day at the resort. All we did was eat, snorkel and sleep. Now that's my idea of a vacation!
The Ningaloo Reef is one Australia's two fringing reefs. It runs for miles throughout the Indian Ocean along the shores of Western Australia, positioned where Northern California sits on the shores in the USA. The reef can be accessed from dozens of places in Western Australia. Few people know about the Ningaloo because the Great Barrier Reef gets most of the attention, but it was our #1 planned destination on our Australian Odyssey. The reef comes so close to shore at Coral Bay, no boat is needed to reach it. Just walk out the front door and into the water, and it's there.
Below is a picture I took of a camper bus parked in a nearby caravan park or campground. The name "Priscilla, Queen of the Bitumen" is a spoof on a popular Australian movie titled, "Priscilla, Queen of the Desert." It wasn't until my friend, David, the star of PART SIX in the book, visited me in 2009 that I learned the story behind the name of this bus. Bitumen (pronounced bitch-u-men) is what we call blacktop or highway pavement. Mr. Bitumen is the guy who invented the gooey-tarry substance that paves the roadways. And Priscilla, Queen of the Desert is a drag queen movie filmed in the outback, the town of Coober Pedy to be exact. I'll be mentioning more about Coober Pedy in the days ahead. For now, you can check out the movie here. I bought it, and it's a hoot! The movie has since been turned into a broadway play, and last I heard, it was playing in London, England. It may still be there. 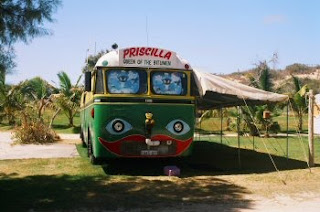 All photos in this post are genuine trip pictures.
http://www.jennifermonahan.com/
Posted by Jennifer Monahan Explorer, writer, and philosopher seeking life's truths at 9:00 AM