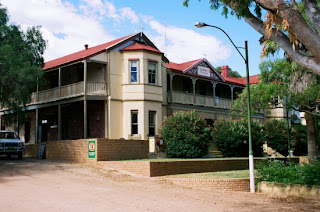 The Priory Lodge in Port Denison, Western Australia, now known as the Priory Hotel, was our final destination on this day. We arrived at sunset, found a restaurant that was still open, got harrassed by a drunk, well-meaning local who poked fun at our American accents, and returned to the hotel for a good night's sleep. The picture above was taken the following morning. The Priory Hotel used to be an old nunnery and all girls school. The place was loaded with character and quiet as could be. They had just reopened after extensive renovations, and I think we had the place to ourselves.
The day's drive was uncomfortably hot until we hit a rare desert thunderstorm midway. It cooled things down a notch, and in the end, we got closer to Perth. Another half day's drive and we'll be there. Below is a picture I took at Hamelin Pool, a place we stopped along the way to stretch our legs. It's home to the ancient stromatolite, a very slow growing algae. I know, it doesn't look like much, but to a biologist, this is a very cool place. 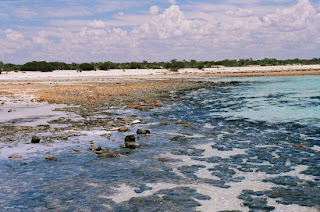