The day started out early, long before breakfast, with a seemingly innocent swim from the beach to the northwest point along the shoreline. We were looking for manta rays. I found this picture on the Internet. This one probably has a 15 to 20-foot wingspan. 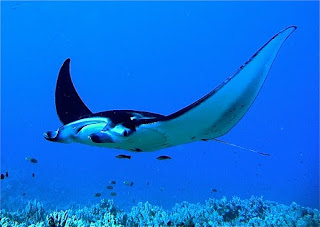 The current got the best of me, and I headed for shore before reaching the point or seeing any rays. Below is an Internet photo of the point. I swam from the far left corner to 3/4 up the coastline. It was the swim of my life just to get to shore. Jeff and I walked back along the beach. The photo below shows people taking the same white path we did. (If you click on the picture, it will go to another screen where you can better see the specs in the white sand.) This picture was taken near the resort. 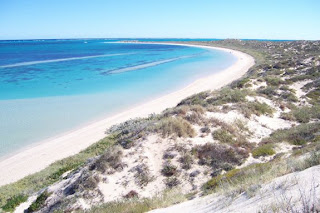 The day ended on a peaceful note sharing a can of lentil soup and a loaf of bread. Food I had stashed in our room. It was Christmas. Everything, even the hotel office, was closed. All day long, children were playing, and just before sunset Santa cruised by in an inflatable skiff. Picture that scene in the one above. It was very surreal. It may have been December, but it was a hot day in the tropics.