After our second night of camping, this time at Ned's Camp, we started the day early with a goal to find Turquoise Bay and continue snorkeling the Ningaloo Reef along the shores of Cape Range National Park. Turquoise Bay is the most beautiful beach I have ever seen, and I declared this day, "The best day ever!" Why? Because I swam with my first wild sea turtle! Click here to watch a video from an Australian TV station that describes my swim.

Below is a picture of me in my oversized shirt to protect me from the sun's rays. This part of Australia is known as "Melanoma Country," so we were covering up and slathering on the sunscreen. 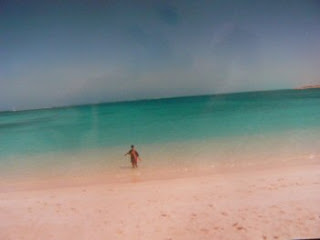 Below is a picture I took just beneath the surface of the water.
There's a lot going on down there! 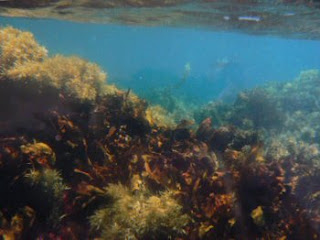 And this next photo is a picture I took of my first sea turtle. He/she was 3 feet long, small, as turtles go, so it must've been a young one. I used an underwater disposable camera. 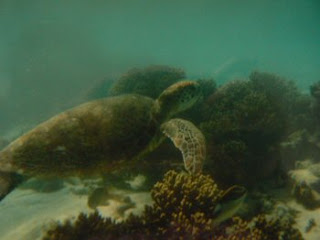 Jeff and I had been in Cape Range National Park for 3 days, and we were getting a bit "ripe" due to the lack of fresh running water, so we headed out to Coral Bay, a small town recommended by the locals. At the end of the road, we found the Ningaloo Reef Resort. An oasis in the middle of nowhere. Our room was an efficiency, so we had all the conveniences of home - a shower, small kitchen, and air conditioning! I was ready for a cool spell after 105 degree temps.