So much for plans. Everytime we thought we were headed for Exmouth to begin our snorkeling adventure on the Ningaloo Reef, something in the southwest corner of Oz kept us there. This time it was a submarine tour. Jeff and I had seen advertisements for the grand opening, so we decided to stay one more day and extend our reservation at the Metro Inn, It was a good excuse to visit Fremantle one more time (yay!) and enjoy the good weather. I have a feeling I was avoiding the heat of the north more than anything else. We knew it was going to be scorcher.
Here is a picture I took of one of the many submarines in the area. It might have been the one we were on, but I'm not positive. They all look the same to me. The USA has an active submarine base in Fremantle, and it was interesting to learn about the strong ties the US military has with Australia. It was a common thread throughout our journey. 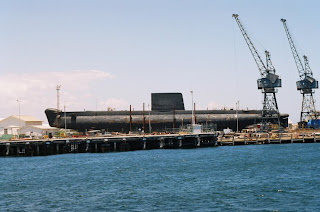 While touring the submarine, I sat down to play "Submarine Operator" at the control station. The volunteer guide yelled, "DON'T TOUCH THE KEYBOARD! THE SHIP IS LIVE!" He then informed me that had I touched just the right keys in just the right order, I could've launched a torpedo right there on the dock. I felt like a two-year old who had to touch everything. Later, I realized it was probably Aussie humor more than the truth, and they must have had a good laugh over seeing my face flush beet red. Geez. I wasn't really going to press any of the keys. How embarrassing.

We enjoyed another Freo sunset over the Indian Ocean much like the photo in the Day 10 post below. This was our last day in and around Perth. We checked out of the Metro Inn the following morning and got the trip moving. Finally.

I have many beautiful reef pictures I've been saving for the Ningaloo entries, so check back often!